Flag-Works Over America is proud to announce the Newest Flag in our stock! The 3×5 Thin Blue Line US has been placed in our inventory in honor of the fallen officers in America and all over the world. Our hearts and prayers are with the families and friends.   Thank you all who serve us to keep our freedom free! God Bless.

The Gadsden flag continues to be relevant today.  It still symbolizes peoples ideals whether in agreement or distain.  It relays to people that the person flying the flag is a proud American, an his /her beliefs are founded in the US Constitution.

The Gadsden flag is a historical American flag with a yellow field depicting a rattlesnake coiled and ready to strike. Positioned below the rattlesnake are the words “Don’t tread on me”. The flag is named after American general and statesman Christopher Gadsden (1724–1805), who designed it in 1775 during the American Revolution. It was also used by the Continental Marines as an early motto flag, along with the Moultrie Flag.

In modern times, the Gadsden flag is often associated with political movements such as libertarianism and the American Tea Party, and has been used by U.S. Soccer supporter groups including Sam’s Army and The American Outlaws since the late 1980’s.

Flag-Works carries the Gadsden flag sizes from 12″ x 18″ up to 6′ x 10′ and larger to be made. Order yours today on our web site or come into the retail store. Made in the USA. Tax Free

Why did Washington use 6-pointed stars? Some historians claim that Washington favored 6-pointed stars and that’s the reason he used them in his personal standard. Another possibility is that he was referencing the stars he wore as a general, which also had 6 points. Washington never wore more than 3 stars, but they did have 6 points. He also is known to have worn a light blue sash as a symbol of his authority. The blue sash and 6-pointed general stars may have been the source of the design for the flag. He simply made 13 stars to represent the 13 colonies.

Flag-Works has every Historical Flags. Check out our web site or visit our retail store. The Washington’s Commander In Chief’s Flag common size flag is a 3′ x 5′

Origin of Come and Take It Day:

The town of Gonzales, Texas holds a Come & Take It Festival each year. It commemorates the firing of the first shot of the Texas revolution on Oct. 2, 1835, which took place near Gonzales. 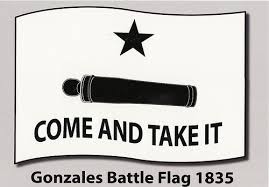 Flag-Works carries this historical flag and many other historical flags. Order your on our website or visit our retail store. We have the Come and Take It flag available in 3′ x 5′.

The Cowpens flag, or 3rd Maryland flag, is an early version of the United States flag that meets the congressional requirements of the Flag Resolution of 1777. Like the Betsy Ross flag, the white stars are arranged in a circle on a blue field; but the circle consists of just 12 stars, with the 13th star in the center. Flag-Works carries varies of Historical Flags. Orders yours today or come into the retail store. Made in the USA. 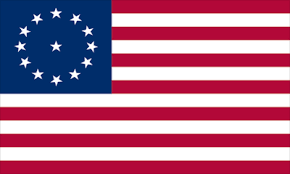 As the War of 1812 waged on, the citizens of Baltimore began to prepare for a possible British attack.  It seemed inevitable; the British considered Baltimore a “nest of pirates” due to the privateer clippers that were built in the city’s shipyards.

During the summer of 1813, Fort McHenry’s commanding officer Major George Armistead wanted a flag that was “so large that the British will have no difficulty in seeing it from a distance.”

There were 15 stars and stripes on the two flags (to represent the 13 original colonies and Vermont and Kentucky,  the next two states to enter the union).  The flags were delivered to Fort McHenry on August 19, 1813.

The Star-Spangled Banner assumed a meaning beyond local celebration. This flag represents the broad ideals and values of the nation. Today, the American flag continues to evoke a special, patriotic feeling. In times of war, when returning from overseas, during space exploration, and at sporting events or other public gatherings, the American flag continues to represent freedom, democracy, and the intangible nature of “what it means to be an American.”

By the dawn’s early light on September 14, 1814, Francis Scott Key peered through a spyglass and spotted an American flag still waving over Baltimore’s Fort McHenry after a fierce night of British bombardment. In a patriotic fervor, the man called “Frank” Key by family and friends penned the words to “The Star-Spangled Banner.”

When Key scrawled his lyrics on the back of a letter he pulled from his pocket on the morning of September 14, he did not give them any title. Within a week, Key’s verses were printed on broadsides and in Baltimore newspapers under the title “Defense of Fort M’Henry.” In November, a Baltimore music store printed the patriotic song with sheet music for the first time under the more lyrical title “The Star-Spangled Banner.”

Dear Flag-Works Customers,
We stand behind the historical significance of the Confederate flag and will continue to sell it as long as we have the ability to due so. Due to recent events, we are currently experiencing a shortage of Confederate flags. This shortage is not of our choosing. Several of our major suppliers have announced that they will no longer be producing the Confederate flag, leaving us to find new suppliers. Please bear with us as we do our best to fulfill all of your orders. We sincerely appreciate your business.

Thank you,
Flag-Works Over America

From the end of the Civil War until the late 1940’s, display of the battle flag was mostly limited to Confederate commemorations, Civil War re-enactments, and veterans’ parades. The flag had simply become a tribute to Confederate veterans.

The Serapis Flag is unique because of its 8-pointed stars and because its red, white and blue stripes are organized in a pattern not found on other American historical flags. The 13 8-pointed stars are arranged in 3 rows of 4, 5 and 4 on a blue field. The flag is also more square shaped than rectangular.

The Serapis Flag, also known as the John Paul Jones Flag, had its origin in a famous Revolutionary War sea battle called the Battle of Flamborough Head, which was fought just off the east coast of England on September 23, 1779. In the battle, Jones’ small fleet of ships challenged the HMS Serapis, a 44 gun British warship that was protecting a massive merchant convoy of 50 ships returning to England from the Baltic Sea.

When John Paul Jones arrived at Texel, a diplomatic crisis arose. The Netherlands were officially neutral in the British-American war and the Netherlands had not yet officially recognized the United States as a sovereign country. The Serapis was not flying an American flag because the flag from the Bonhomme Richard had been blown off during the battle and went down at sea. This led to the British Ambassador demanding that John Paul Jones be turned over to the English government as a pirate, along with the Serapis, because, as he was not flying the flag of any known nation and he was sailing a captured ship, he was, according to international law, a pirate.

The Serapis Flag is a popular historic American Flag, probably due to its unique design and is still available at Flag-Works. Order yours today on-line or stop the retail store. Made in the USA

Flag-Works has all you need when it comes to making that right choice for flags. Spring is the time to replace your tattered flags that have gone through a rough winter. Whether it is an American Flag, State Flag, Military Flag, International Flag, Historical Flag or a Decor Flag we have it available for you. Order today or come by our retail store: 16 Kennedy Ln, Concord, NH 03301.

The Battle of Bunker Hill was fought on June 17, 1775. The American colonists were surrounding Boston which was full of British troops. Across the Charles River from Boston was the Charlestown Peninsula where the town of Charlestown and Breed’s Hill and Bunker Hill were located. The hills were of strategic importance because they overlooked the surrounding area, including Boston Harbor. The history of the Pine Tree as a symbol of New England predates the European colonial settlements. In eastern Massachusetts, southern New Hampshire and the southern corner of Maine, there lived a nomadic tribe of Native Americans known as the Penacook. “Penacook” is an Algonquin word meaning “Children of the Pine Tree.” flag-works.com